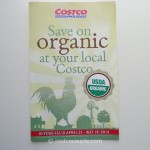 Here comes another round of instant savings just for organic items at Costco! Unfortunately, once again, these instant savings are only valid at Bay Area, Northern California and Northern Nevada
Read More

Costco’s March 2014 Coupon Book is here! It appears that Costco has allowed Chobani back into the stores. There’s a $4 instant rebate for the variety pack this month.
Read More

Are you ready for Costco’s February 2014 Coupon Book? Coz it’s here already! The new coupons don’t start till next Thursday 01/30/14 but we received the coupon book today.
Read More

Once again, Costco is offering additional rebates for certain organic items in the store. There was a similar offer back in September as well. Unfortunately for those not living
Read More

Here’s the Costco January 2014 Coupon Book to start off our new year! There’s a few new food items in this coupon book that we’ll have to check out
Read More

No rest for Costco employees this month! The new December Coupon Book starts the day after the November one ends! Not sure if we should call this the December
Read More

We received this Costco 2013 Thanksgiving Weekend Savings booklet on the way out of the store this past weekend. The savings are valid for Friday November 29th, Saturday November
Read More

Costco is wasting no time between coupon books! The November 2013 Coupon Book is here even before the October one has ended! And it starts on Wednesday 10/30/13 and
Read More

Just a reminder that this is the last weekend to take advantage of the extra savings in the October 2013 Coupon Book. The additional dollars we save here and
Read More
This website uses cookies to improve your experience, analyze site traffic and serve targeted ads. By continuing to browse this site, you accept the use of cookies.
Yes, I Accept Read More
Privacy & Cookies Policy