Costco’s August 2016 Coupon Book is here! The extra savings are valid starting Thursday 08/04/16 to Sunday 08/28/16. The first thing we saw when we opened this coupon book
Read More

Costco’s July 2016 Coupon Book is here and the savings start on Thursday, 07/07/16. The first thing I looked for when I opened this month’s coupon book was a rebate
Read More

Costco’s June 2016 Coupon Book is here! I know we’re late on this as it’s taken us a while to get back into schedule after the Memorial Day break.
Read More

Costco’s April 2016 Coupon Book has arrived and the rebates are available from Thursday 04/07/16 to Sunday 05/01/16. There are good rebates for some of the items we’ve previously
Read More

Costco’s March 2016 Coupon Book has arrived and the savings start on Thursday 03/03/16. If your car needs new wipers and/or car mats, now’s a good time to take
Read More 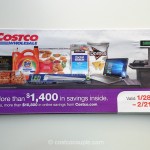 Hey, everyone. We’re back from vacation and had to take a few extra days to recover from the flu. So it looks like Costco wasted no time with the December
Read More