Check out the Formosa Yay Matcha Mochi if you love both mochi and matcha. These are glutinous rice balls made with glutinous rice flour and have a green tea paste filling in them. They
Read More 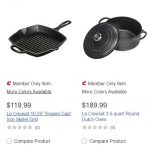 We spotted the Le Creuset 6.5 Qt Deep Round Dutch Oven at Costco recently. It’s a beautiful piece and the size is right for many recipes. But if you already own a 6.5 Qt
Read More

The Champion Ladies’ Crewneck Sweatshirt is available in white, black, navy and grey. The grey version has a Champion repeating logo pattern all over the sweatshirt. The other colors have a raised Champion logo
Read More

Costco has released a set of  In-Warehouse and Online Hot Buys for the holidays. Most of the items have rebates that are valid from 12/13/19 to 12/24/19. The Hot Buys are not clearly advertised
Read More

These lovely Large Holiday Planters were available at Costco this past weekend. They’re so pretty and festive and I think they’ll make a great gift for the host or hostess of a holiday party.
Read More

We were pleasantly surprised to see the Monte Pollino Organic Fettuccine in the store this past weekend. I don’t think Costco offered it last year. Each bag contains 40 oz of organic fettuccine nests
Read More

The Champion Polarized Sunglasses feature polarized lenses that effectively eliminate 99.99% of reflected glare. It appears the lenses have a 6-layer coating starting with a scratch-resistant hard coat, and followed by a 100% UV
Read More