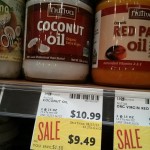 Since Kristin commented in the original post that the Nutiva Organic Extra Virgin Coconut Oil was an excellent deal at Costco, we were curious and wanted to know how great
Read More

Let’s compare prices for Welch’s Fruit Snacks. Is Costco cheaper than Safeway? At Safeway, there are 10 pouches (0.9 oz each) in a box. It’s normally priced at $2.99
Read More

Is Costco cheaper for San Pellegrino Sparkling Mineral Water? Let’s find out. We found the item priced at $1.49 for the 750 mL bottle at Whole Foods. At Costco, it’s
Read More

If you’ve been thinking of going the single brew route, then you’re probably considering getting a Keurig. Costco has the Keurig K75 Platinum but is it cheaper? Amazon has
Read More

Coconut water is really popular these days and we wondered if Vita Coco Coconut Water is cheaper at Costco. We checked out the prices at Whole Foods. Prices for
Read More

There’s an instant rebate available for the Gogo Squeez Organic Applesauce in the August Coupon Book. This appears to be a good item for lunch boxes and we wondered if
Read More

Alright…I can’t help myself. I spotted the Sterling Vineyards 2010 Cabernet Sauvignon at Trader Joe’s and immediately took a photo so that I can compare it to Costco’s price
Read More

We previously wrote about how Costco now carries Bob’s Red Mill Organic Quick Cooking Steel Cut Oats in the store. Well, so does Amazon…but is Costco cheaper? Amazon has it
Read More

If you love volleyball and want to to own the Wilson Official AVP Game Volleyball, you could save a few bucks by getting it from Costco. We checked the
Read More
This website uses cookies to improve your experience, analyze site traffic and serve targeted ads. By continuing to browse this site, you accept the use of cookies.
Yes, I Accept Read More
Privacy & Cookies Policy